Pit Bull. There is no other breed of dog—or arguably, any other animal at all—whose mere mention can elicit such strong opinions. Try a word-associate game with your friends. Ask them what they think when you say “Pit Bull.” Chances are their responses will be more negative than positive. And it’s no wonder. No other type of dog is as widely banned from housing, legislated against, or incorrectly vilified by the media.

How did we get here?
Pit Bulls were once widely considered ideal family pets—affectionate, loyal, and gentle with children. But in recent years these dogs have suffered tremendously from a combination of overbreeding, bad publicity, and irresponsible owners. In reality, the overwhelming majority of Pits and Pit mixes are sweet goofballs who have gotten a very bad rap.

Learn the truth.
National Pit Bull Awareness Month is October, this month of appreciation and education designed to change perceptions and stereotypes about Pit Bulls and their responsible owners. Please take a moment to learn the truth about these wonderful dogs and consider rescuing one of them from a shelter.ASPCA

Bell and Tuxedo, top left, were abandoned. Bell, staring you down, was taken to Halifax to be killed. ARK rescued her and the owner of Tuxedo. Kenneth, fostered her. When he moved to Georgia he returned Tuxedo to the Center. But Tuxedo became terribly depressed and destructive. In desperation we called Kenneth and asked him if he would adopt Tuxedo. He agreed and our transport delivered Tuxedo to his dady. Now the two best friends snuggle every chance they get and Kenneth calls with updates and sends photos.

ROSIE....
BEFORE AND AFTER - Rescue, Love, and Care Saved me while I saved Eleven puppies that weren't even mine! 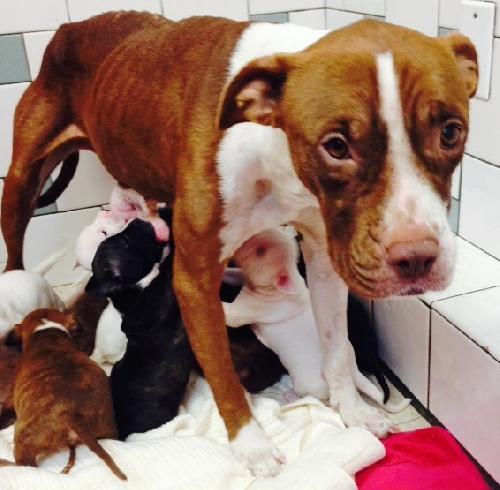 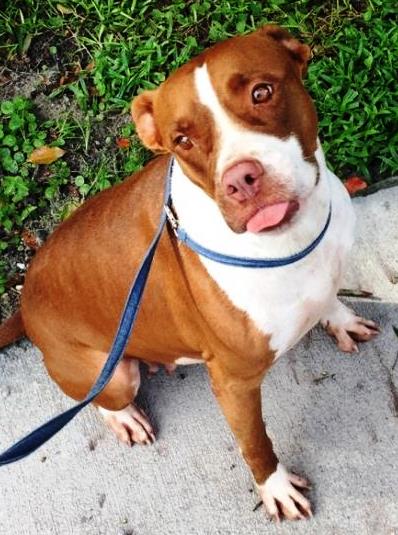 Is that "pit bull" on your shelter's adoption floor really a pit bull? The results of a recent four-shelter study suggest chances are good that he's not.
Four Florida shelters - Jacksonville Animal Care and Protective Services, the Jacksonville Humane Society, Marion County Animal Services, and Tallahassee Animal Services - participated in the study. Four staff members at each of the four shelters indicated what breed(s) they thought 30 dogs were, for a total of 16 observers and 120 dogs. Of those 120 dogs, 55 were identified as "pit bulls" by shelter staff, but only 25 were identified as pit bulls by DNA analysis.
Additionally, the staff missed identifying 20% of the dogs who were pit bulls by DNA analysis, while only 8% of the "true" pit bulls were identified by all staff members.
These poor track records for correctly identifying breed is particularly important, say study authors, because in many municipalities, dogs identified as "pit bulls" are not offered for adoption or are subject to local breed bans preventing their adoption or ownership.
Even in areas without restrictive ordinances or shelter policies, pit bulls are usually stigmatized as undesirable. Labeling a dog a "pit bull" can result in difficulty finding him a home or even his death.
The study report was authored by Kimberly R. Olson, BS and Julie K. Levy, DVM, PhD, DACVIM, of the Maddie's®Shelter Medicine Program, University of Florida and Bo Norby, CMV, MPVM, PhD, of the Department of Large Animal Clinical Sciences, Michigan State University.
Among the authors' conclusions were: Because the observers' identifications were so inconsistent, visual identification of breed is unreliable. The safety of individual dogs is best evaluated by looking at the individual dog's attributes, including personality, behavior, and history, not breed.
------------------------------------------------------------
BONNIE IS AN EMOTIONAL SUPPORT ANIMAL AND MASCOT FOR A CAR SALES COMPANY

Read her endearing story here and view her amazing photographs.